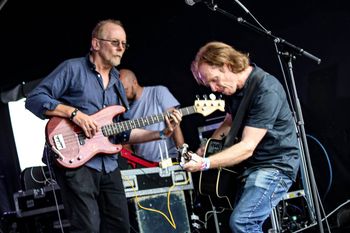 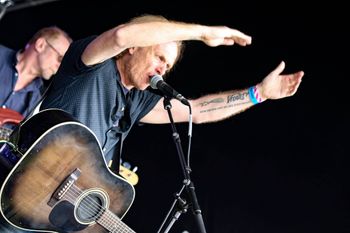 Following in the footsteps of Steve Earle and The Dukes or Tom Petty and The Heartbreakers Stevie Jones and The Wildfires deliver their own unique blend of modern alternative rock centred around powerful acoustic-based songwriting. With a number of line up changes over the last decade they have released two studio albums and a live EP receiving favourable reviews and airplay including BBC Introducing, Planet Rock and BBC Radio Scotland.

The 2015 debut ‘Stratigraphic Heart’ was recorded at Parlour Studios in Kettering with producers Russ Russell and Neil Haynes and featured Marshall Gill from Blackballed/New Model Army. The follow up 'Angels and Sirens‘ released in 2018 was produced by Adam Ellis at Deadline Studios, Leicester and splits between hard-edged guitar based material and more delicate acoustic arrangements - touching tales on everything from sex, love, politics to life in the music industry. Guests included accliamed guitarist Janet Robin (String Revolution, Lindsey Buckingham band) and Leicester songwriter Autumn Dawn Leader.

Live their show is full of energy, edge and passion and they are just as happy in a small club or gracing larger stages. 2019 saw the release of the live EP 'Morningless Live' and a busy gigging schedule which included a well-received slot in at HRH Crows Festival at O2 Academy, Sheffield. Lockdown lead to Stevie writing and releasing a solo acoustic album 'Come In From The Rain'. On return to the live stage many of the songs from this album have featured in the set as full band versions alongside new material as they look towards creating their third album.

“Beautiful melodies tinged with sadness, soaring guitar breaks delivered with a voice of experience. A unique voice that at times in which you can hear the influence of The Levellers or New Model Army”

“wordy lyrics with rootsy Rock music. Acoustic guitars underpin the songs, but there’s some fiery electric guitar to be found as well....bright and energetic”